In March and April  I was busy shooting a commission for a client, specifically the areas of Cumbria and North Wales. It was a very last minute thing that I got a call a week before and luckily I had time to shoot Cumbria before going to Morzine with Jared. The brief was to capture adventure images, not too extreme, the sort of thing that the average tourist would aspire to with a guide or group. It’s a tricky one as the interpretation can vary massively from person to person , but essentially they said , just go and do your thing but bear in mind that it’s not high end adventure we’re selling. 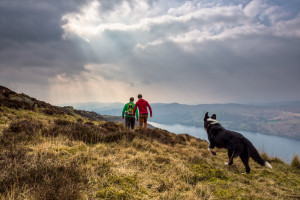 I know North Wales well and knew exactly where to get the shots I had in mind and where the sun would be in the sky to get the lighting right but Cumbria is a place I hadn’t explored as much so having local knowledge from bikers and my assistant was a massive help. Grizedale bikes were super helpful and Jake and Katie went the second mile to get the images in the can. 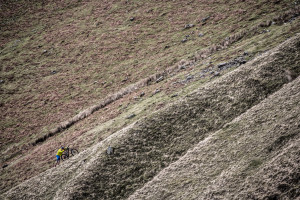 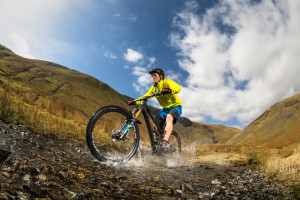 I won’t tell you how many times Jake had to push his bike up this hill, ah the glamour of photoshoots !

There is so much chance to working in the outdoors, especially with the British weather, it can easily rain non stop for 5 days in both of these locations and we were super lucky to get Cumbria with a stable high pressure for the week and in N Wales we only had one day that was clouded over. there’s no way you can legislate for that, if the weather really craps out then there’s nothing for it but to postpone but thats an expensive thing, accommodation is all booked and paid for , athletes are all booked and need to be paid so i breathed a massive sigh of relief when we had the images that I was happy with. On the days we lost light we shot less sky and areas where the shadows would have detracted, e.g. forests and some of the bike trails through the trees. 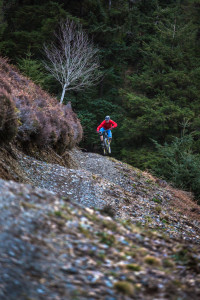 Due to a misunderstanding , one day we ended up without athletes and thanks to Ewen Turner for stepping into the breach for the day , great to work with him, super nice guy and a very talented biker and mountain guide, will be working again with him in the future .

One of the great days in the shoot was the day we shot Crib Goch in the morning, left the car park at Pen-y-Pass at 6 am and were climbing through an amazingly dramatic scene of swirling clouds and light rays. We also found out that one of the bikers who was with us had a fear of exposure LOL ! not a good place to find out but well done to Jenny and Rich for helping him up and down. 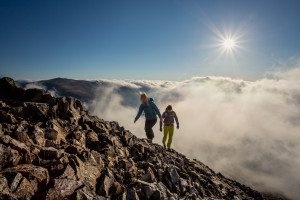 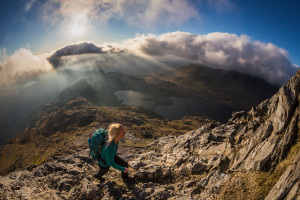 We got back to the car by the time the hordes were getting on the ridge like a line of ants , glad we had an early start and were first on the ridge, the early bird gets the worm  …. and the best light : ) 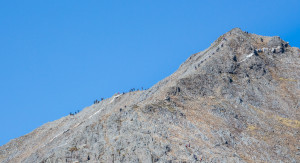 Lens wise I was carrying the 17-40 f4, 70-200 f4, and the 8-15 f4 fisheye, all Canon L series glass and beautiful optics. I think this combo of 3 lenses gives me a good weight and great coverage when I’m on my walking/scrambling. I’ve been using the Loka Fstop Ultra light pack which is a great pack for adventure sports photography, probably the best there is I would say.

Once we had a quick cup of tea we headed of to shoot some bridleway biking and then got up onto Bristly Ridge and Castle of the winds for evening light. I had pre visualised a number of shots but they depended on the clouds being a certain way which they weren’t so went tight on the pinnacles on the Cludair to get the walker in the right body position for the composition. 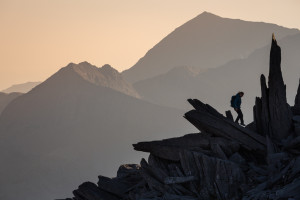 I do believe in pre visualising the images that you want to shoot before you go out and often I just close my eyes before a big day and picture the scene in my mind, where the sun will be , what lens I’ll want to use, the foreground and background to the shot, whether I’ll need flash and where the flash would need to be. If you’re super organised you can make a shot list , I’m never that organised !

That was a big day and my feet certainly felt it in the evening but the images were worth it with a couple of the best images from the shoot on that day. 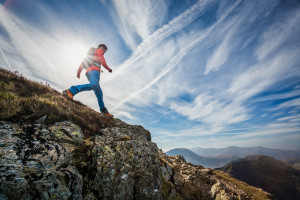 My assistant was Tom Hughes, a talented young photographer in his own right, and he was carrying the Quadra battery pack flash unit that I use when shooting against bright light, its got enough power to illuminate against the sun and light enough for someone (else) to carry, its one of the reasons you may see from time to time a request for photo assistants for shoots BUT , bear in mind that the days are long in the hills, and you need to be hill fit and able to carry all your own kit and camera kit for 10-14 hour days, its not glamorous but can be fun , or maybe type 2 fun . So , if you see me asking for an assistant , then just make sure that you’re not going to do yourself an injury by coming along. 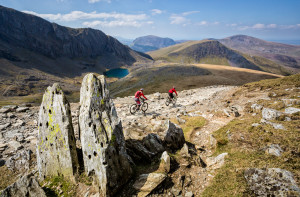 The last day of the shoot was on the Llanberis path shooting the bikers riding the trail down to the village. I have to confess that I took the train up to Cloggy station. Its strange sitting in a train going up a mountain with the tourists heading up for their half hour of waking around the top station mountain experience. Nuff said . I did have the tripod to take up as I also had to shoot time lapses so just about justified it to myself but feel I’ll have to make up the moral shortfall on my next trip.

So thats it , think I’m still a few shoots behind on the blog but the Shoot for Rab and Wild Country images are under wraps so there’s not really much I can show from those shoots , you’ll probably see them next year in the mags. Thanks for reading and liking and sharing etc, appreciate it. 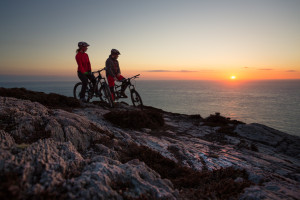