I have finally managed to get back and finish of the Naked Mountain project started a few years ago , here’s the link to the previous shoot https://nadirkhan.co.uk/blog/naked-mountain/

I had seen Stephanie’s work and really liked the grace and calm that she brought to a shoot, and during lockdown we had chatted about the possibilities of her coming up to Scotland as soon as lockdown had lifted and getting some images around Scotland . The choice was Glencoe for day 1 and around Edinburgh for day 2 .

The first location also gave us maybe my favourite image of the shoot and it was my version of  ‘Angel of the North’ using the bridge arches to look like angel wings. For those that know, this is the A82 , a busy road from Glasgow up to Fort William and beyond and lorries and tourists usually fill this road. It was fortunately a bit quieter due to decreased tourist numbers and we were able to grab gaps in the traffic fire of some images. All the shots were taken using off camera flash technique using an Elichrom quadra ELB400 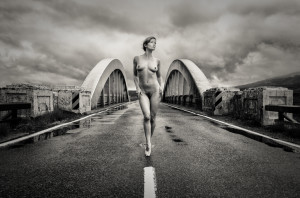 There’s a location just of the turning down into Glen Etive that photographers love and I hate it . Its the cliched shot of the Buchaille , with the tree and the milky water and landscape photographers that don’t want to think for themselves go and put their tripods in the marks where the last guys tripods marks are and take exactly the same shot . Its the thing I hate about landscape photography , that landscape photographers are like pack animals and go around in herds , without a creative  sense of trying something different . I know I’m being harsh but there is some truth in it , all I’m saying is , don’t just copy the last guy, think for yourselves. And maybe I’ve now become that which I decried but I think having Steph modelling maybe gives the image a bit of a new twist to an overdone location. 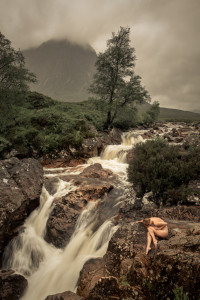 The weather was kind enough to us , it was raining but not massively , and it was windy enough to keep the  midges away so we headed down the glen and ducked under the bridge at the meeting of the 3 waters . Steph waded across the river and we found some images using the red rock and ferns , you can’t think of too many art nude models who’d happily wade across a cold Scottish river to get the shot , above and beyond ! 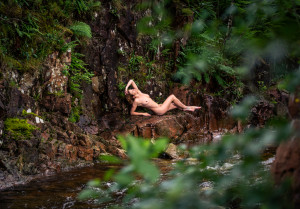 It was cold though and we took breaks long enough for Steph to warm up her cold limbs , and just when she was warm , she’d have to take all the clothes off again . Ah , the glamour of it all . Next up we went down to get some background of the 3 sisters , it was misty and moody and I was going for something really simple to offset the drama of the hills in the background 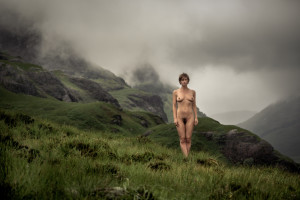 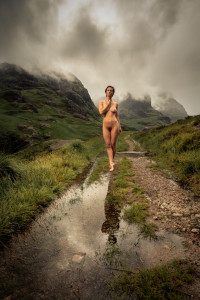 After a productive day , we headed back to Edinburgh ready for an early start to avoid the crowds the following day .

Arthurs seat has a ruin at the base of the track and there’s a couple of lines of sight that I thought would create a strong image and this shot is pretty close to what i had in mind. With all of the shots above , while I have an idea of the composition , its Stephanie’s creativity with translating the mood of the place into something that visually looks good . We had to be at the location early as this site is usually busy with walkers and tourists , some of whom had a pleasant view when they came across Stephanie modelling. 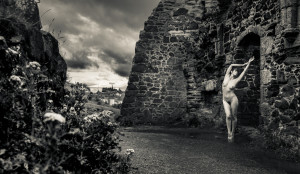 The next step in the project is to create a set of A5 post cards that will be sold as a set through my website , I’ll let you know when thats available