Last moth I was doing a shoot on Skye with the very talented Ayla Rose , a model from Suffolk whose work I had seen and thought she would be perfect for the sort of images I had in mind.

I guess the idea for the shoot came a bit from a series called Stone Nudes in America, I liked the idea of the art nude being part of the landscape and using my landscape background to make the image part landscape, part art nude.There was also a slightly deeper , some would say more pretentious, thought process behind the images. I was trying to combine the feminine traits of nurture, life giving , graceful beauty and strength, and juxtapose those qualities with wild, remote and somewhat wilderness places. 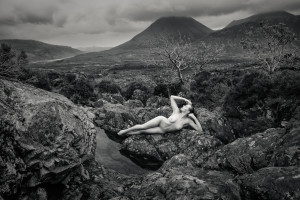 Ayla’s background as a gymnast was very useful as was a ‘do anything /go anywhere’ attitude. Also along were Kirsty and Rachael to support Ayla and hold the flash and make sure a big blanket was ready to cover Ayla should any unsuspecting walkers come into view around a corner. When we were shooting at the Quirang, the Trotternish ridge race was taking place so some of the runners got a bit of a surprise as they came around a corner to see a stunning naked woman holding a big red cloth in the wind, “ooh er missus”. A few whoops of approval were heard so maybe next year the runners will ask for this to be part of the route : ) 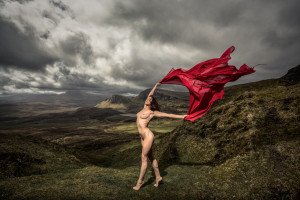 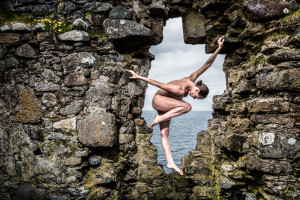 We were essentially dodging the rain , following the weather, mostly its a given that the Cuillin are going to be wet at some point in the day so we headed North, West or South to escape the rain but managed to get the Fairy Pools on a moody morning and got some smoke bombs going to add some drama to the scene. All the shots were lit with an Elinchrom Quadra with or without a 70cm deep octa , depending on how windy it was. the triggers were hyper synced PWTT5 which are good but can also be a bit temperamental, luckily , no issues with them on this trip. 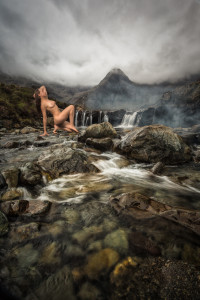 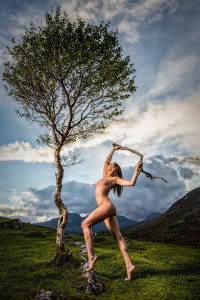 Now being a seasoned pro I’ve realised that you get the best images when you have your camera with you, it would seem like a rooky mistake to leave your camera , and lenses in a rucksack back at the hostel. We arrived at Neist point, I opened the boot of the car to grab my kit only to see an empty boot, my world reeled, the sky started spinning , wtf, where’s my kit ?? ! , I remembered then that I had come down the stairs of the hostel, put my kit bag on a bench , popped outside to speak to someone , the team were already outside ,and after a bit of chit chat we set off , oops . Luckily , Tom Hughes from Beyond Limits Media was also along to do some bts film footage and was using my 1DC so I shot with that and my 24-70 which was on the 1Dc and used his 70-200f2.8 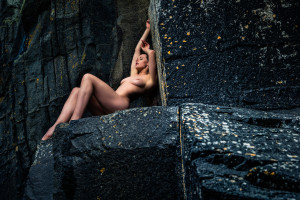 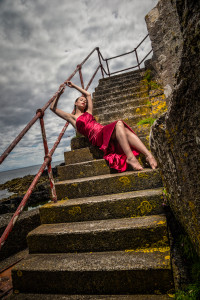 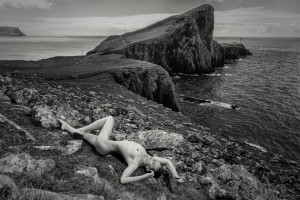 Now , I didn’t expect to do a shoot like this and not get some stick for it so I was prepared but surprisingly it didn’t come from where I was expecting. All the women who have seen the images have really liked them , one woman who follows my FB page stopped me and said she had made one of the images her screen saver on her phone. The sort of thing women said was it was empowering and showed a confidence and strength in the model and a sense of freedom. Thats was what i was going for so glad the women got it, but quite a few men really didn’t get it . The sort of things that were said was, this isn’t art, cheap, tasteless, exploitative etc etc.

I suppose you can’t please every one with what you do , nor should you try. I think all you can do is be true to the ideas and visions that present themselves to you, follow your instincts and gut feeling and see what happens. All in all , I’m happy with how the shoot went, the film hasn’t even started being edited so hopefully in the not too distant future when things have calmed down a bit for me personally , I will be able to get it on and edit the film and put it online. My idea is to offer landscape/fashion/art nude workshops working with off camera flash, taking in ideas of composition and editing over a 3 day period in the mountains. Message me if you’re interested. 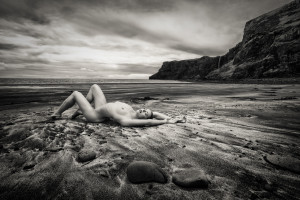 As always, thanks for taking the time to read my musings , see you on the hill maybe.