I thought I’d start a series of blog posts around ‘Milestones’ , ie first front cover of a magazine, first publication, first major sales promotion image, first major commission , first major fashion shoot etc . These aren’t in chronological order , just the order they happened to come to mind in . I thought it may be interesting to photographers for me to dissect the image, ie  , gear choice, composition , editing etc and why I decided that this image was the image of choice from the shoot.

First up is this image of Naomi Buys on ‘ Wicked Gravity’ 8b at Malham Cove. Naomi had just completed a successful ascent of this route and we had gone back to photograph it. I was jumaring on a line along side Naomi and when I know I’m going to be fairly close to an athlete I choose a wide angle lens, in this case the Canon 17-40mm f4 L series lens on a full frame Canon 5D iii. The reason for this is that the 24-70mm while being versatile just isn’t a wide enough lens to get the action and also get the sense of height and depth to the shot 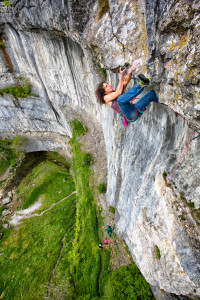 The moves coming through the roof are really tenuous and to get the shot I decided to get above the roof so could get the drop down to the base of the cove , the sweep of the cliffs round Malham and also capture the action as Naomi climbed through the roof.

The composition follows a standard rule of thirds positioning Naomi on the intersection of thirds gives both a strong position for the climber but also allows the surroundings to be composed as I wanted them to be. As a general rule for climbing photography I want to see 3 out of the 4 limbs to give a sense of the body and the moves and create a sense of dynamism in the shot , if i can get the climbers face and eyes in shot even better. The viewer can connect with a face more than with the top of a helmet or just the top of a head. The worst is when a photo is composed and you can’t even see the climbers head. Its worth bearing in mind these little things when you’re taking shots of climbers. Also , its important to try and give some sense of the steepness of the terrain as well . A wide angle lens does cause a lot of distortion of the vertical depending on the angle of the lens to the subject so its also important to keep an eye on whats happening to verticals in the frame and how much they are being distorted

The images was shot in Raw and then imported into Lightroom. After correcting for Chromatic aberration, which is always a problem with wide angle lenses,  the image was imported into a detail extractor to bring up the detail in the rock texture. curves and correction of saturation were then applied back in Lightroom.