A few weeks ago , Elinchrom contacted me to ask if I’d be happy to be filmed during one of my photoshoots , in order to feature the advantages of using the new EL Skyport HS trigger. Now, I’m happy being filmed and talking to camera, it doesn’t really bother me so was happy to be involved. 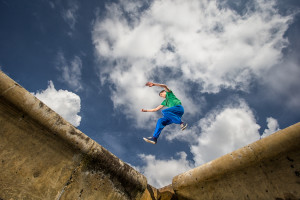 A key part of my style is using high speed flash in the outdoors to create a certain look, it was something that really captured my imagination when I first saw people using flash creatively and led me to going on a Brett Harkness course to learn more about off camera flash , and then Brett encouraging me to get on board with the Elinchrom system. Now , while I love using flash , sometimes its just not realistic; in gale force winds on a N face somewhere , its just not going to happen, just getting usable images is a challenge without adding more complexity to the situation.  So there is a time and place for it and the location for our free running parkour shoot was perfect.

The trigger allows me to shoot at any shutter speed , so I’m not limited to the normal sync speed of the camera of 1/250 sec. This means I can freeze action in broad day light, shoot directly into the sun and shoot wide open to create seperation between my subject and the fore/back ground. The nice thing about the new Elinchrom trigger is there are no issues that I have had in the past with third party triggers, it just works straight out of the box, no hassles , no strops, no hissy fits : ) . 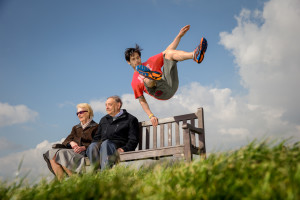 An elderly couple who were out enjoying the morning sunshine were commandeered into sitting on a bench for me so we could do some shots around them. 2 ELB400 units were used , one as the main light and one as a fill light for the shadows.  The Parkour guys were from Team Kinetix, a really cool bunch of guys and worth getting in touch with if you fancy doing some high speed shooting. 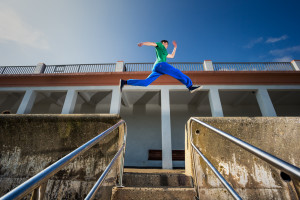 But art and photography isn’t just about gear, it’s mostly about feel , emotion and heart , and the rest of it is just tools to enable you to create the image that you have in your head. Composition is a key for me and a composition has to have a natural balance to it . I tend to use  leading lines a lot and use a central composition if the image needs it. I rarely think of concepts such as rule of thirds etc, as my eye and brain determine what works and what doesn’t for any particular scene.

I’m a sucker for big skies, I love clouds, the drama , the extra dimension that big skies give to a shot. Constable used to use at least 50% sky in his paintings , and one of my earliest artistic influences was the work of JMW Turner and his swirling dramatic skies , and I guess thats something that has stuck with me in my photographic work. Using the Hi sync means i can underexpose my sky, not lose my highlights and still get perfect exposure on my subject. 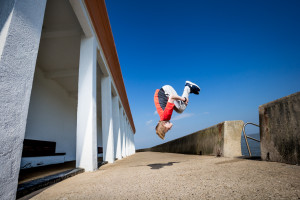 If you’re interested in one to one training for using this type of lighting for your action shots then drop me a line.

Thanks for reading and check out the Elinchrom site for their kithttp://www.elinchrom.com/reviews/SkyportPlusHS.html