A few weeks ago I had the pleasure of working with Glenmore lodge shooting their scrambling course based on Skye for the upcoming Summer brochure. Skye is a place , probably out of everywhere that I’ve photographed, that never fails to inspire , whatever the weather. The night I was driving over the clouds were just immense and brooding and even if its raining, the fronts can move through fairly quickly if you’re not on the mountains and you can find somewhere on the island to get the right conditions.

We had 3 days to get the shots , which for Skye, with the unpredictability of the weather is the very least you need. As it was , the forecast was a real mixture of rain , high winds and clearing for the last day. As it happened, I think I got my favourite shot of the trip on the first day 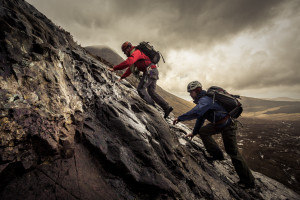 I was with Matt from Skye adventure and Scott , one of the trainee instructors from the Lodge , and we were getting above and along side the main instructor and the clients to get the best shots and angles etc. This shot was taken as we were starting the ridge of Sgurr nan Eagg.  What I liked about the image was the light streak across the sky which is then reflected in the rock, and that then makes a strong central focal point with the ridge line coming down from top left to lower right, and the splash of red in the middle of frame just finishes it of, I like the fact the colours of the second climber are more subdued so its there in a supportive role without trying to take attention away from the main focus. This was shot with a 17-40 f4 Canon L series lens, a great lens for landscape and adventure sports, as long as you’re careful not to have your subjects to close to the edges where there is a bit of distortion.

The wind was super strong and gusty and I was shooting at iso1600 at least just to keep my shutter speed high as there was so much camera shake from the wind . At times you had to throw yourself onto the rock as the wind was like a train hitting you and on the descent the wind changed direction suddenly and blew me clean off my feet , crazy stuff. 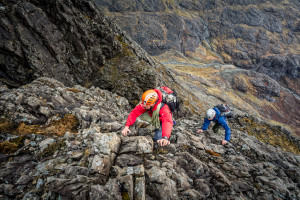 The thing I love about Skye is the textures and the darkness of the rock, I’m surprised that hollywood and big budget films haven’t been done more on Skye as its just such an other worldly type of landscape. One of the reasons the 17-40 works so well is it gives you a lot more to work with regarding leading lines and you can draw in so much and create depth which you just couldn’t with a longer focal length. I was also carrying the light weight 70-200 f4 .

Day 2 was a real stinker, zero vis, rain all day, the camera came out but more out of a sense of ” well I’m being paid to take images so I better take some but they’ll be crap”  This image maybe sums up the day , 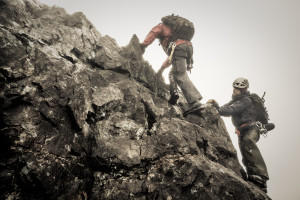 Day three was redemption, at last no rain , no high winds to battle and just dry rock and dizzying , vertiginous exposure to work with. Pinnacle Ridge on Sgurr nan Gillean is a beautiful route, I’ve climbed it before and was lucky enough to have an image in last years landscape Photographer of the Year which was shot on this ridge.  There are so many stunning locations and backdrops its hard to do such a massive and impressive route justice with one image. I was carrying the 8-15 fisheye as I had an idea on where it might just get a shot that I had in mind. 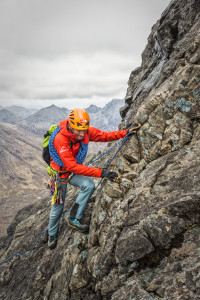 Though the forecast had been good , the clouds and light were a bit flat for most of the day , not quite what i had hoped for. So much of the drama of an image comes from the atmospherics and big skies and brooding clouds are my favourite to work with. These clouds were a bit light weight, no menace but still getting in the way of any real  direct sunlight .

I think I got my fisheye shot, the very airy pinnacles on the W ridge of Gillean 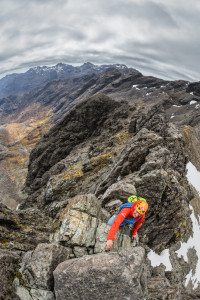 The sun finally did come out as we were descending , thanks a lot pal !! 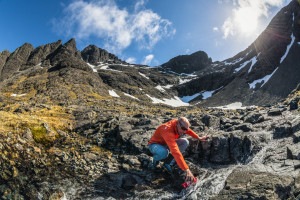 All the gear is carried in a F-stop Loka UL pack ,