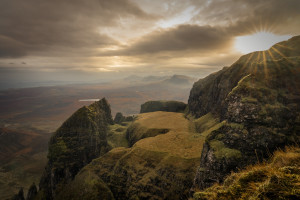 Sarah and I decided to head to Skye for a few days after the madness and mayhem of Christmas , it’s such an emotionally charged time , tbh I’m not a fan. Its nice seeing family etc but I think the expectation that because it’s Christmas somehow someone sprinkles magic dust over everything and everyone and life for a few days is sweetness and bliss is a bit of nonsense. All the stuff people struggle with all year , if anything can be magnified 10x over Christmas so I’m glad to be getting back to a normal rhythm. 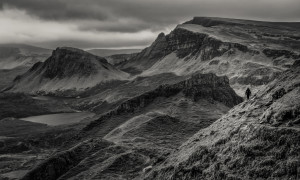 I was trying out the Sony A7 iii for this trip, I’ve been a Canon user for all of my commercial work but there’s something nice about a full frame sensor in a body size that doesn’t feel like a ton weight , especially when you’re skiing so this trip was a bit of a trial of what its like to work with before a few ski shoots later this season when winter finally arrives in Scotland. 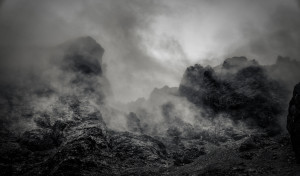 Now, I’m not a landscape photographer though I do love landscape photography but there are so many people that do it extremely well and there are also so many cliches the world doesn’t need another photographer taking pictures of perfect reflections in lochs and milky waterfalls.  So when I found myself taking pictures of reflections in the loch and using slow shutter speeds to make water milky I realised then that all creativity had finally left my soul and that everything good and pure within me had died. 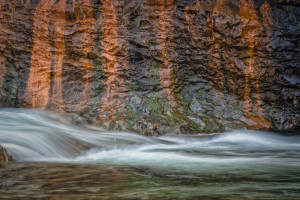 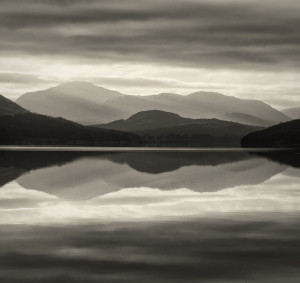 Obviously I’m kidding but it does sadden me how many people are happy to follow others, put their tripod where the last guys tripod was and take the same shot as a thousand other photographers, what’s the point of that ?  Sarah tells me that I’m not happy unless there’s an impending sense of doom and menace in my images and unless the viewer leaves with a sense of having their soul deeply disturbed , that I’m not happy . There is some truth in that I suppose in that working in Scotland , one has to deal with the wonderful Scottish weather which , let’s face it , is inspiring,  brooding, atmospheric and can also be a little bit foreboding.  And the weather often is what gives my images impact and thats partly what makes photographing adventure sports in Scotland so exciting 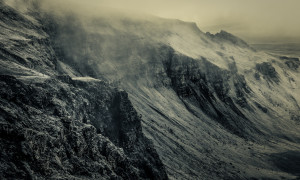 One thing that we did do on our last day on Skye was go cold water swimming in the Fairy pools. I’ve often thought it would be really cool to swim there and we had taken our wetsuits with the intention of swimming but somehow didn’t quite muster the psyche for it till sarah finally said  ‘f**k it , I’m going in ‘ , so what could I do but go in as well, and apart from my feet freezing and my head feeling totally numb when I went below the water surface, it wasn’t too bad and will defiantly do it again . 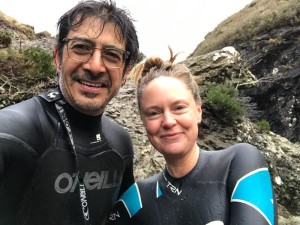 I’m running some workshops this year at Glenmore Lodge in October and will also be running workshops elsewhere as well as one to one sessions or if you have a group you’d like me to run a workshop for then get in touch. Best wishes for 2019