Seems a while since I sat down to write up my blog and realised I had quite a backlog of stuff and images to talk about. I had posted one of the images from Ines’s ascent of The Hurting shortly after she climbed the route but then didn’t put anymore up as there were a few magazines running features on it so waited until the magazines were all printed and out there before i put up any more images. The magazines have all now been printed and so here’s a few thoughts and pics. Looking back on it , I wish that i had been able to get onto 2 lines , one on either side of the crag and get different angles , but the reality is that the conditions were so harsh , and Ines’s attempt so full on that there was no way I could say , ‘hang on a minute ‘on the tiny granite crystal in 100mph gusts , while i jugged up and abed down a different line. So , I tried to make the best with what I had, there were textures to juxtapose, soft lines of snow building up on the rounded rock and I tried to balance the image with foreground detail at times. 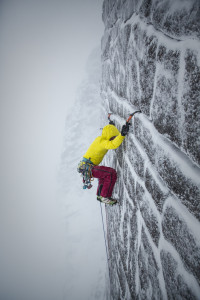 I tried to use the horizontal breaks as lead in lines where I could , tried going in tight and tried going wide to give some sense of the surroundings but the vis was so low that often I could barely see Ines and she was only about 20 feet away. I was shooting with my fave lens , the canon 24-70 markii, its heavy but super sharp and a good do it all lens. the challenge was keeping the front of the lens clean, keeping the view finder clear as it filled in with snow and trying to keep the image sharp , sometimes when there’s a lot of snow or sand or rain , the cameras AF can be fooled and focus on the particles in the air rather than the main subject

I liked the choice of colours on the day , though I had no say in it , Ines has worked with many photographers so knows the score , ‘don’t wear black’ !  Funnily enough , Ines asked if I had shot any images in landscape format  but when I checked back , all were portrait, I guess because it best suited the composition. 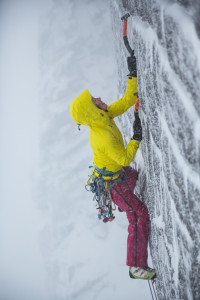 After the shoot , the back of the camera was frozen , as the moisture from my breath had frozen around the back wheel of the camera but nothing that a slow defrost in the cafe didn’t sort out. 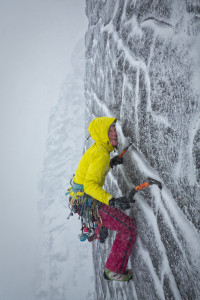 As for the climbing , that looks tenuous as anything so won’t be trying that anytime soon, but amazing effort and big up to Simon Yearsley from BigTree camper vans and Ali Rose for being my safety on the day.